Alpha Investing wrapped up 2019 by closing two December deals, one Multifamily property in Colton California, and two Senior Living facilities in Ohio and California. While the past decade has been one of sustained growth, the economic landscape in 2019, and looking ahead to 2020, is a bit more checkered. As we look to navigate this time of uncertainty, Alpha Investing will continue its focus on deals that have strong fundamentals, focused business plans, and knowledgeable, trustworthy Sponsors at the helm.

2020 has started off with one global headline after another. Geopolitical tensions in the Persian Gulf heightened, while trade tensions with China appear to have de-escalated as both sides came together to sign a Phase one trade deal. Australian bushfires and the Coronavirus outbreak, which started in China and now has confirmed cases across several Asian countries, France, Australia, Canada and the US could further hinder an already sluggish global economy. Although it is too soon to tell the impacts these events will have on the year ahead, it is helpful to provide a recap of 2019 that led us to today.

While 2019 reported an extension of the US’s record-breaking period of economic growth, signs of weakness started to emerge in certain sectors. 2019 real GDP is estimated to have grown at an annual rate of approximately 2.3%, in line with projections. Consumer spending, which makes up nearly 70% of GDP, remained strong, supported by low unemployment, rising wages and high consumer confidence. The national unemployment rate has declined steadily since peaking at 10% in October 2009, in the aftermath of the financial crisis, and now stands at a 50-year low of 3.5%. Wages have similarly steadily risen and in recent years, lower-paying jobs have started to see more gains, which has led to high consumer confidence. In contrast, business spending was weak and manufacturing output declined due to sluggish global economic growth and escalating trade tensions. 10-year treasury yields declined from a high of 3.24% in 2018 to a low of 1.47% in 2019 as investors sought safety. The plunging 10-year yield caused a brief inversion between the 2 and 10-year Treasuries, which is often seen as a key recession warning.

In 2019, the Federal Reserve (the “Fed”) cut the Fed funds target rate three times by a total of 75 basis points, a sharp reversal to the four rate hikes in 2018. The Fed’s benchmark rate now stands at 1.5-1.75%, down from 2.25-2.5% at the end of 2018. The Fed cited ongoing global economic weakness and trade uncertainty as reasons for the more accommodative stance. Looking ahead at 2020, the Fed expects the economy to continue to expand at a moderate rate, supported by solid household spending and supportive financial conditions. The Fed has signaled no further action and an increased standard to initiate changes in the future, indicating rates are likely to stay low for the near-term.

In many ways, 2020 appears to be an extension of 2019, with the economy chugging along bolstered by a strong labor market but facing similar headwinds and uncertainties to those that plagued 2019. While the Phase one trade agreement between the US and China signaled a change from the combative tit-for-tat stance taken in 2019, the agreement does not resolve many major economic disputes and leaves many tariffs in place. Three and a half years after the United Kingdom voted to leave the European Union, “Brexit” appears to finally be on track to occur on January 31, 2020. However, trade agreements detailing the future economic relationships still need to be negotiated. Adding to the uncertainty is the US presidential election that will take place in November.

In the current environment, Alpha Investing believes there are still opportunities for attractive risk-adjusted returns in commercial real estate. We intend to capitalize on specific opportunities that exist employing the same disciplined strategy as 2019, while remaining nimble and ready to adapt.

We believe multifamily and senior housing are need-based asset classes that should have a more inelastic demand if the economy softens. On the surface, the office property does not look like Alpha Investing’s typical investment. However, it exhibits attributes we prioritize, including a seasoned and experienced Sponsor, good fundamentals and downside protection. The property sits on one of the last developable parcels in one of Atlanta’s strongest submarkets. It is 100% triple net leased to an investment-grade company with below-market rents and a year and a half left on its initial lease term. There is significant optionality for the investment, including re-leasing the office space in its current form at market rents, developing the lot or selling to a developer. The property was acquired without leverage, which maximizes business plan flexibility and provides significant downside protection.

Within multifamily, Alpha Investing invested in five properties with three different sponsor partners. Two sponsors were repeat partners and the third was a new relationship. We ended the year with two investments with the new sponsor partner. All the multifamily investments were in markets experiencing strong economic, employment, population and rent growth, including Phoenix, AZ, Richmond, VA, Seattle, WA and the Bay Area and Inland Empire in CA. In many cases, the Sponsors were able to tie up the acquisitions off-market or step into the transaction after the initial buyer failed to perform, resulting in purchase prices that compared favorably to trades of similar properties in the market. In addition to buying well, the investments offered an opportunity to capture upside through targeted value-add business plans, including physical improvements to the property and units and improved management practices.

An example of a multifamily investment was the May acquisition of a 488-unit garden-style apartment community in Phoenix, AZ. The Sponsor was a new relationship, introduced through an established real estate attorney in Alpha Investing’s network. The Sponsor focuses specifically on a few MSAs, including Phoenix and Southern California, where the principals have extensive experience. Phoenix remains a top market in the western US as a strong job market and relative affordability has driven population growth, which in turn continues to drive multifamily demand. The Sponsor leveraged a broker relationship to acquire the property off market, resulting in an appealing going-in cap rate of 5.4% and an attractive basis per unit of $81,500, which was substantially below sales comps of $125,000 per unit. The seller had invested $2.5 million in deferred maintenance and common areas but had not renovated the unit interiors.

The seller also focused on keeping the property well-occupied, resulting in in-place rents that were $52 below market. The combination of below-market rents and unrenovated unit interiors presented a value-add opportunity with significant upside. The Sponsor’s business plan to add value was to execute on a $7.2 million capital program to rebrand of the property, focusing on unit interiors and accretive exterior improvements, and improve management practices to capture loss-to-lease. 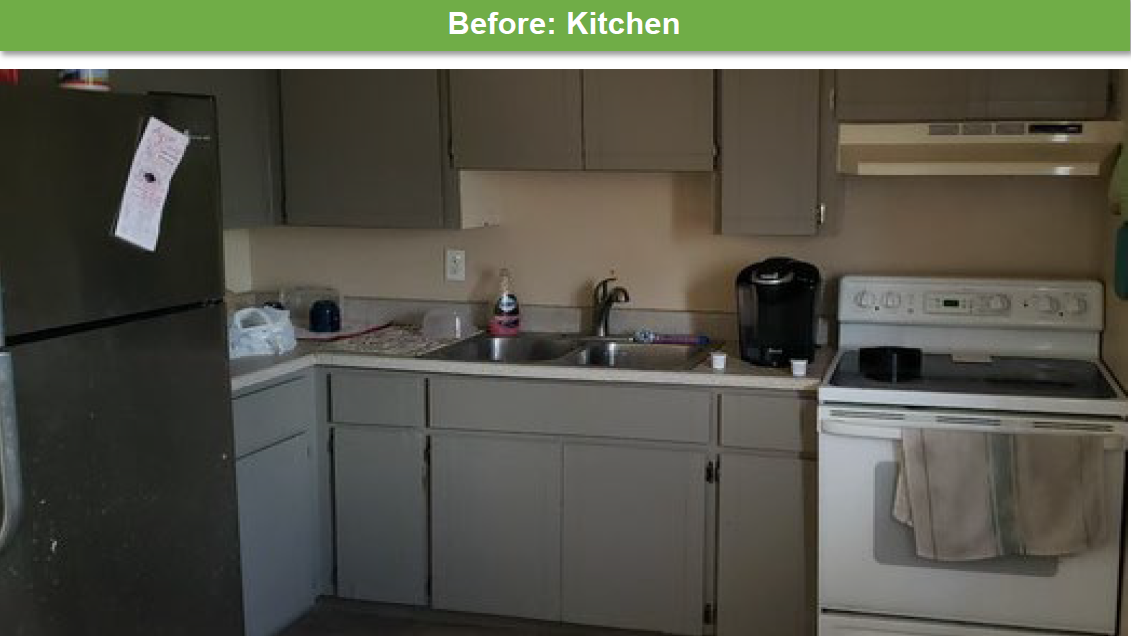 Since closing on the acquisition in May, the Sponsor has completed all exterior renovations, including the installation of new roofs, the addition of a new sports court and dog park and has upgraded the clubhouse, pool, landscaping and paint, among others. Through the end of December 2019, 106 units have been renovated, representing 22% of the property. All renovated units have been leased on average at $217 or 30% monthly rent premiums to rents at acquisition. The actual renovation pace of 106 units is well ahead of the underwritten renovation pace of 60 units and leased rents are 3.2% ahead of underwritten rent premiums.

Unrenovated units have been leased at monthly rents $67 above acquisition. The Sponsor accelerated the pace of unit renovations in response to the strong demand for renovated supply. In the short-term, this has led to higher vacancy and lower income compared to underwriting. However, having executed on all exterior upgrades and nearly a quarter of interior unit renovations, the Sponsor has already added significant value to the property and proved there is demand for renovated product. They now plan to lease up the property and stabilize occupancy in preparation for a sale in the spring/summer of this year. 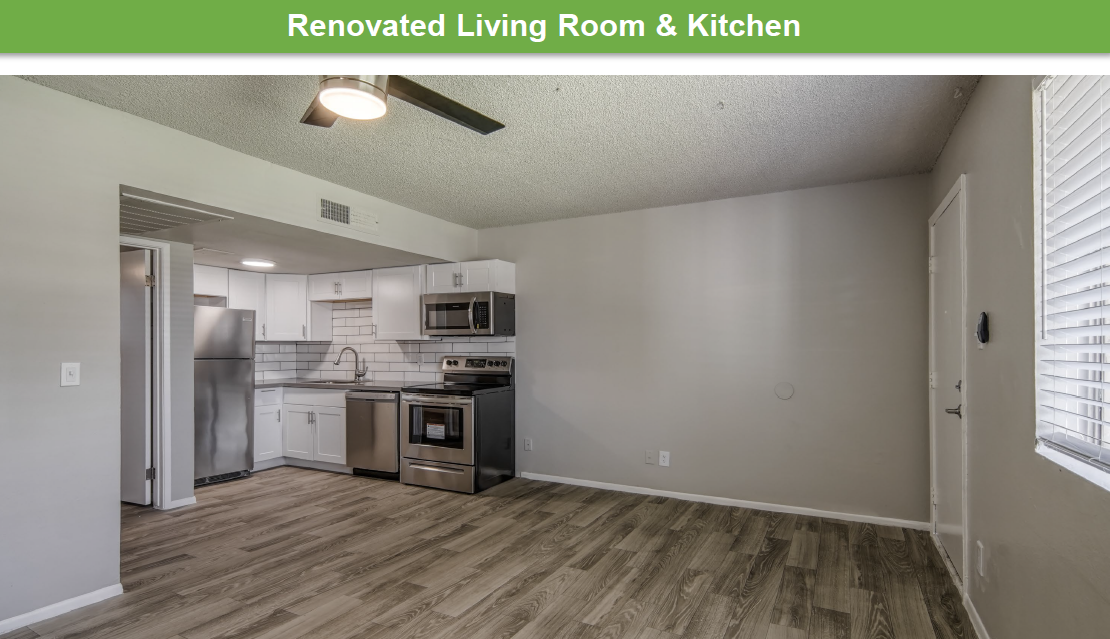 As we look ahead to 2020, we believe the moderating economy will impact the commercial real estate industry, but that commercial real estate will continue to offer attractive relative risk-adjusted returns in addition to providing investors with diversification from stocks and bonds. Low interest rates should continue to be positive for real estate investment. As uncertainty persists, Alpha Investing will continue to emphasize fundamentally sound investments with actionable, market-specific business plans to create value and generate returns. Over the past year, this has led us to pass on a number of opportunities that have not met our investment criteria. We continue to emphasize the importance of seasoned and experienced sponsor partners and continue to speak with new and existing sponsors to evaluate a wide range of investment opportunities to select a handful of investments that fit our approach to responsible investing while provide attractive risk-adjusted returns.

As always, we appreciate your interest in Alpha Investing. Please feel free to reach out to us at any time.

A leading macroeconomist explains how knowledge of economic cycles can help investors make better decisions at the right times.

Reflections and Lessons from 2021

AdaPia and Daniel discuss the biggest lessons they’ve learned in 2021 and share their hopes and expectations for the new year.

How to Diversify Your Assets With Alternative Investments

A seasoned oil investor explains how she successfully branched out into crypto and real estate.

An Investor’s Guide to DeFi

As decentralization continues to shape the future of finance, an industry expert shares his perspective on making smart investments, blockchain security, and more.